Written by LebanonStuff on February 25, 2018. Posted in Images. Leave a Comment 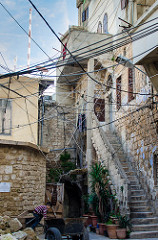 This is a courtyard next to what was the old synagogue of Saida/Sidon. It is a site on the tourist map from the Soap Museum even though it is currently a residence. A Syrian family has been living there since 1990 and realized years later that it was an old synagogue after people/tourists started showing up at his door step. (www.pri.org/stories/2016-06-01/it-took-muslim-man-10-year…) Nobody was in the building the two times we tried to knock on the door, but there were a few kids playing in this courtyard. The local who showed us the way the second time also told us that the neighborhood recently changed its name and sign from the Jewish Quarter to the Quarter of Jerusalem after Trump’s recent actions.